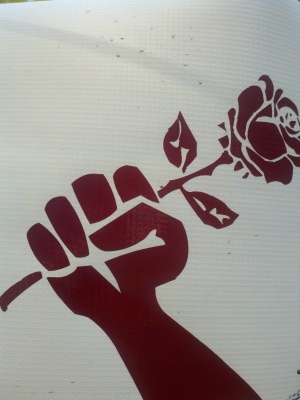 “A well regulated militia, composed of the body of the people, being the best security of a free state, the right of the people to keep and bear arms, shall not be infringed, but no one religiously scrupulous of bearing arms shall be compelled to render military service in person.” —It’s always Wikipedia

Became the familiar, abbreviated version, because had the Second Amendment been phrased as above, it could have been ratified or not by states individually. And so the phrases making it clear that no, sorry, people: No militia, no guns. Which also means: You’re fucking idiots, 2008 Supreme Court (which thought it was deciding the constitutionality of laws re gun ownership in the UK).

The text suggests, and the Wiki entry makes clear, that the people of individual states are allowed to keep arms to form state militias, or — sure — to go Rambo, for the purpose of preventing the federal government from overstepping its bounds.

After a long road, this is the amendment’s heritage from the British right to bear arms (whose primary concern was that evil-rich Protestants never again be prevented from keeping arms by the king and, therefore, go a season without hunting. From then on, the parliament has told the UK what to do with with guns. …With “not possess them” being the dictate of import.

Which explains why the monarchy and Parliament run roughshod over the people united in the aforementioned kingdom. Such that the UK currently enjoys a better standard of living. And yes, despite the fact they are burdened with national health care, as every single Western country is, but this one.

Which is why Europe is currently going to pieces… Except the rank of how countries are performing reads the same as a list of states from most to least socialist. Which doesn’t make such things right, it only means such governance is incredibly effective.

GUNS! YEAH! And so the text above, which — especially in context — makes it clear that the people writing it (with James Madison looming over them) meant the use of weapons to be as tools that could be called into use to fight the federal military if/when it tried to steamroll states’ rights.

…Have you noticed a similarity between GOP governance and NRA logic?

The GOP decreases the funding of government programs. Years later, when these programs are reviewed, it points out that they aren’t working terribly well. Which means they need to do more with less money. …Or — shit, I don’t think the GOP even gives a cogent explanation. I think it’s generally understood that no government program ever could do any good, and so when one isn’t it should get less funding as a punitive measure.

…And so government shoots itself in the foot, lets gangrene set in, and soon it’s time to amputate.

The NRA exists to do this: Allow any American anywhere to have whatever gun he/she wants whenever and wherever he/she wants it.

Well, a lot of assholes got together for a common cause. Together, the assholes had a buttload of money (I’m funny!). Skip the boring steps, and the fact is that the NRA has written gun legislation — laws have been passed that were drafted by the NRA — for a good long while.

What do these laws do? Flood the US with guns.

What happens as a direct or indirect consequence (disagree? How?)? People get shot! Which, my lord, is what guns are designed to fucking do!

But the wrong people get shot. The sainted “responsible, law-abiding gun owner” is more likely to use his gun in an accident (as in, Shit Dad, excuse the paralyzing I just gave you!) than anything else. Also, the more accessible guns are, the higher the rate of suicide.

If you need to know why… Don’t have kids.

WHICH IS TO SAY! Buttloads of guns cause buttloads of problems! What to do?

The NRA has it covered: Any problem caused by a gun can be solved by a gun. Ergo? We need more fucking guns!

This is a smack addict logic. A person uses H until he is no longer able to get much of a high from the drug, but needs it to keep from getting sick from withdrawal. The smack led to the development of withdrawal syndrome. Withdrawal syndrome can be put off indefinitely with more smack!

…Until you catch the addict on a bad day and give him/her a gun maybe.

And I believe that’ll do (pig), for now. I’m not going to hammer any points through to China just now.

And it feels wrong. …Especially without paroxysms of vulgar ranting.

…Apparently someone got sanity in my peanut butter. I’ll bring the chocolate next time.

PS: Don’t all “illegal” guns start out legal? That is, malefactors don’t manufacture the things themselves, correct? …In fact, aren’t most guns involved in crime obtained through theft? …Theft of a gun belonging to a “responsible, law-abiding gun owner”?

PPS: LeftyPatriot used a cite from this post. Check out the lot-of-everything going on over there.

3 thoughts on “When A Country Has So Many Guns… It Needs A Lot More Guns!”

The Newest News from OtherVerse: